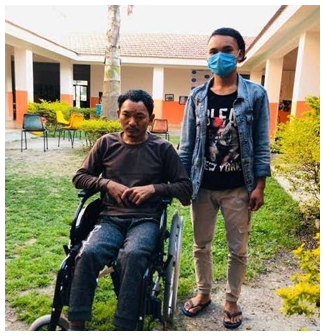 Dil Bahadur Chepang is a 44 years old farmer from Gorkha. He has only a son from his first wife who died when his son was very young. After his wife’s demise, he married another woman from whom he has 4 small children who go to school. Agriculture is the only income source of the family.

In January, he fell down from a tree while he was cutting fodder for the cattle. He was not able to move his lower limbs, so he was taken to a nearby medical center from where he was referred to Chitwan Medical College (CMC). Again from CMC, he was referred to Pokhara and again he was referred to National Trauma Center, Kathmandu for surgical procedure.

Chepang family spent their money in traveling and treatment in different hospitals. But new hope sprouted to Chepang family when they brought Dil Bahadur to Spinal Injury Rehabilitation Centre for rehabilitation, but their concern is only about the expenses for food to eat, medicine for the treatment and mobility aid.  His elder son who is just 18 years old has finished all the saved money from his labor work too. His son is now the main caretaker and hence, is not able to work and earn.  Due to the poor economic condition of Chepang’s family, SIRC provided full financial coverage for his rehabilitation which includes, bed charge, rehabilitation cost, food and medicine and mobility aid.