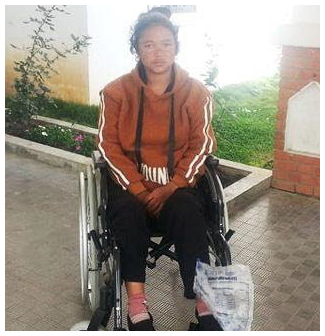 Dolma Tamang is an 18 years old girl who comes from a remote village of Rasuwa. She was a diploma student in veterinary medicine. One fine morning in December 2018, she felt pain in her back and slowly she was not able to move her whole body. She felt difficulty in breathing too. Only after a day, she was taken to Manmohan Hospital Kathmandu but she was referred to Neuro Hospital from where she was conservatively managed for her Tubercular militias for the cervical spine. After two months of stay at hospital, she went back home because of her financial problem. She was bedridden for several months at home but she was referred to SIRC by one of the doctors who visited her during the visit to her village.

Her father finished a lot of money during the treatment at Neuro Hospital in a loan. Because of her poor economic condition, she was provided with full financial coverage for her rehabilitation including bed charge, rehabilitation cost, medicine, food and wheelchair.