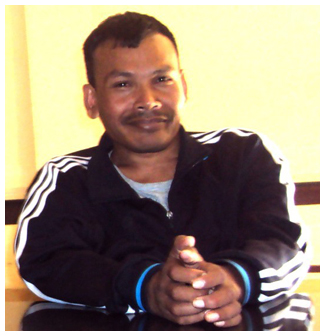 41-year-old Likh Ram Chaudhary is originally from Nawalparasi but lives in Hetauda Mu-nicipility, Makawanpur with his spouse. He works as a supervisor in a Uniliver Nepal Ltd, he used to travel most of the time from Hetauda to Kathmandu. While traveling to Kathmandu by Jeep through narrow road of Kulekhani Highway Likh’s along with other passengers faced a fatal accident. Like never thought what happened to him that day, would change his life forever.

A detailed report on the next morning paper revealed that the Jeep fall 100 meter downhill from the road. Likh, one of the lucky casualties, was found alive and was immediately taken to the Neuro Hospital, Kathmandu where he under-went surgery for his cervical level spinal cord injury.He was then referred to SIRC for comprehensive rehabilitation.At SIRC, Likh’s joyful personality reflected in the eyes of all patients and staff. Meanwhile, he was making significant improvement in his ther-apy sessions. With continuous support from his wife and centre staff, he spent around five months at Spinal Centre, trying his best to re-cover.

This month, Likh left home with a wheelchair in hand. Likh has not only proven himself to be a man of determination, but also as a true inspiration for all.